When constructing and running assays, a lot of effort goes into removing bias from assay data. Wherever possible, the aim is to treat all test samples in the same manner, at the same time, using the same equipment, to reduce variation and sources of error in the data gained from the assay. In an ideal assay, the only variation would be caused by the samples in the wells.

Removing bias in assays is essential because “that results in a biological method that can be applied to test compounds over a period of weeks, months, or years and for which the results generated at the outset will be comparable to every test along the way.” [1] If your assay method is biased, then all the data generated from these assays will also be compromised.

In this white paper, we look at the reasons why assay plate Controls and Standards are used and how these need to be managed to ensure they provide a reliable measure of data quality.

Because the assay ideal is hard to achieve, scientists use Controls and Standards to measure an assay’s consistency and check that its data may be relied on. The criteria for standards and controls are:

Complete the form to continue reading...

Ideally, your test samples, controls and standards all go through the same process at at the same time, using the same instrumentation. This is not always possible, so adding standards and controls must be carefully planned, tracked, managed – and auditable. It is a case of ‘Who watches the watchman?’ Standards and controls are there as a quality control (QC) check of assay data, but you need to ensure that they too are added consistently and in a way which will provide a reliable measure for assay data. 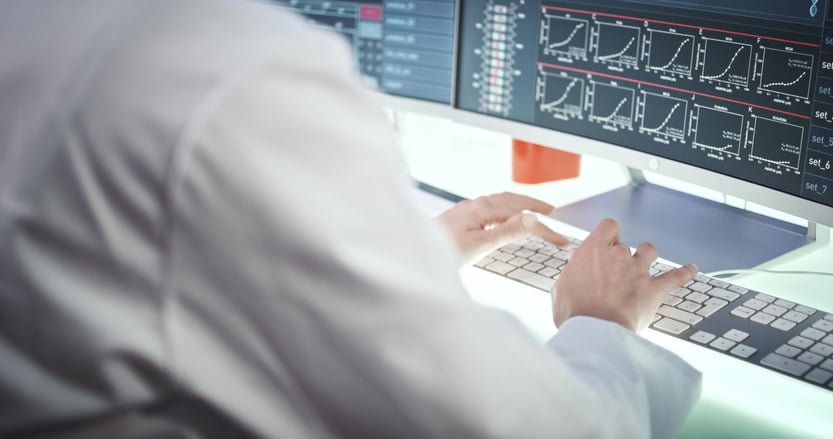 The difference in signal (e.g. fluorescence, luminescence, colourimetric, radioactive decay) between the Max and Min controls is your assay window. Generally, the larger the assay window the better. A small assay window will require a small standard deviation whereas with a large assay window you can accept a larger degree of variation.

The responses to the standard curve data points are expressed as percentage based on the Max and Min control responses. Standard curves are typically plotted with concentration on the logarithmic X-axis and the % responses on the Y-axis. The slope of the curve should be between 0.8-1.2.

The Z-prime (Z’) value, based on the mean and standard deviations of the Max and Min control wells, takes the assay window AND variation into account.

Z-prime can never go above 1:

From the standard curve you can extrapolate an IC/EC50, that should be within the expected range.

The standard curve must pass validation to give confidence in the results gained for the test substances.

Controls and standards should be present on every plate to check for plate-to-plate variations. If not, you may be faced with the following compromises:

Careful placement of your controls and standards can also be critical to avoiding:

Conventional liquid handling means controls and standards are most easily added in columns, commonly 1 and 24, making them subject to the effects described above. Some companies use the flexibility of acoustic dispensers to position controls and standards throughout the plate in a serpentine plate pattern to avoid these problems. However, it is important to review the workflows for your preferred approach. Sometimes the limitation may be whether your automation is physically capable of carrying it out in the best way.

Because controls are a single concentration, they are easier to process. The operator can transfer them to an assay plate as they are. However, standards are usually supplied at a single top concentration which needs to be serially diluted across the plate to generate a dose response curve, preferably at the same time as the test samples.

Different liquid handler types require different approaches to preparing assay plates. They may also introduce bias in different ways. This creates processing challenges for the sample management team who must weigh up pros and cons of each approach and track which was used for each assay addition. For example:

Managing these different approaches, equipment and variables is made easier if they can be automatically tracked by sample management software or LIMS.

Controls and Standards in Complex Assays

So far, we have discussed simpler examples of managing controls and standards in single sample wells. More complex assays, such as those using combination screening or pooling, lead to much greater challenges.

For instance, in a pooled substance assay, one or more additives may be dispensed into each mixture well to validate each well measurement with a pool QC sample. This means a much greater number of substances needs to be tracked for every individual well used, as well as assessing total volumes of each substance needed, recording how each one is added and from where.

Again, the challenge is to schedule and track all the sources, volumes and transfers required to create such plates and also record the complex interaction of potentially different numbers of samples in each pool plus the subsequent sample and solvent concentrations.

Managing controls and standards to provide a rigorous quality check of assay data is central to ensuring your assay results are reliable and can be compared meaningfully with similar screens.

It requires you to manage lab automation and processes with as much care and attention as is given to choosing chemically suitable substances as standards and controls and how these are placed. It is a significant undertaking and one that is often undervalued. It is made significantly easier with a good sample management LIMS, such as Titian’s Mosaic software, that will manage workflows, tracking and provide an audit trail for your controls and standards as well as your samples.

After 15 years as a scientist at Pfizer working across many different groups, Tim Stroud moved to MedImmune for 3 years to specialise in managing laboratory automation. He joined Titian Software in 2014 and is now a Sales and Application Consultant.